To share your memory on the wall of Aubrey Edwards, sign in using one of the following options:

Joe, as he was known, was born to Lewis Sellars and Corine Lott Edwards in Knox City, Texas, a small town north of Abilene. Joe’s p... Read More
Aubrey Joe Edwards was born Dec. 24, 1940 and passed away on Sept 11, 2020 with his family by his side.

Joe, as he was known, was born to Lewis Sellars and Corine Lott Edwards in Knox City, Texas, a small town north of Abilene. Joe’s parents were sharecroppers so farming and raising animals have always been in his blood.

Joe always wanted to have Native American blood as he had heard family stories of being related to Cynthia Ann Parker, mother of Quanah Parker Comanche Chief. Joe’s grandmother was a Parker and a distant cousin, we did Ancestry several years ago and he’s all European.

When Joe was 7, the family moved to Austin, as his dad’s health could no longer handle farming life. Joe entered the 6th grade at the new McCallum High School and stayed until he graduated in 1959.
During junior high and high school, he joined 4-H and raised rabbits for show and meat, sharing all his winnings and proceeds with his parents.

After high school graduation, he went to work for the Sears Service Center, then joined the U.S. Army during the Vietnam era and went to Airborne School, but never served in Vietnam. His friends would often tease him that they could not believe he would jump out of a perfectly good aircraft. After serving 4 years he received an Honorable Discharge. He returned to work at Sears and various other jobs over the years.
Joe was married/ divorced twice and raised 2 children. He met the love of his life in 1984, but didn’t know it, when he was looking for a veterinarian for his cats. Joe’s love of animals, which he had had since childhood led him to the animal show circuit. He showed rabbits, canaries and then in the early 1980s got hooked on showing cats in The International Cat Association. He entered the judging program in 1984, which opened up a new door to travel and friends. He was excited and shocked that cats could take a poor West Texas boy all over the world. He loved his travels to all of the United States, Canada, Mexico, Europe, Japan and Russia, often sharing these travels with his wife of 22 years, Caroline Fralia. He was humbled to receive The International Cat Association’s 2006 Judge of the Year Award.

In 1997, when Sears downsized and he lost his job, he pulled himself up, started a pet sitting service, a cat show production company and then went to work for the Humane Society of North Texas for 13 years before he retired. He enjoyed cooking, working in the yard and trying to teach Aurora to watch old westerns with him.

Joe’s life was a model of resiliency. He took whatever life handed him with grace and dignity. With Joe, what you saw, was what you got. He was always the first to offer a helping hand no matter what the situation, whether it was human or animal. He will be greatly missed by everyone, animals included.
He is preceded in death by his parents, his brother and sister, and his other love of his life, his daughter Beth Edwards.

He is survived by his pride and joy, daughter, Aurora (aka Roe or the Kid) Edwards; his wife of 22 years, Caroline Fralia; granddaughter, Cassie Marie and husband, Nic; great-grandchildren, Olive and Desi of Baton Rouge, La.; his broken granddaughter Jessye C Edwards; his son and daughter in law who shall not be named as they asked not to be a part of the family; various cousins, nieces and nephews; the cat fancy community; and his animal rescue community.

I would also like to thank Dr Roger Eppstein, Dr Tasneem Ahmed and Dr Robert Ruxer, along with Community Hospice of Fort Worth.

Services will be private and will be invitation only. In lieu of flowers, please donate in Joe’s name to your favorite charity. If you do not have one, please consider:
Recycled Love Animal Rescue, Inc – www.recycledloveanimalrescue.org. It was started by his late daughter, Beth Edwards.
Read Less

To send flowers to the family or plant a tree in memory of Aubrey "Joe" Edwards, please visit our Heartfelt Sympathies Store.

Receive notifications about information and event scheduling for Aubrey

There are no events scheduled. You can still show your support by sending flowers directly to the family, or planting a memorial tree in memory of Aubrey "Joe" Edwards.
Visit the Heartfelt Sympathies Store

We encourage you to share your most beloved memories of Aubrey here, so that the family and other loved ones can always see it. You can upload cherished photographs, or share your favorite stories, and can even comment on those shared by others.

Lucy and Scott Armstrong sent flowers to the family of Aubrey "Joe" Edwards.
Show you care by sending flowers 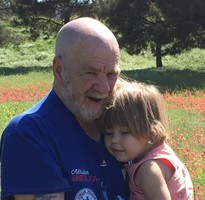