To share your memory on the wall of Clarice Thomas, sign in using one of the following options:

Clarice dedicated her life to Christ at an early age. Clarice received a degree in nursing and worked in that field in Chicago, IL until her mother became ill. She moved back to West Memphis, Arkansas to take care of her. In 2015 Clarice moved to Texas to be with her sons. Clarice was a beautiful person and she loved her family. She will no longer suffer as she went on to be with her Heavenly Father on September 5th, 2020.
Clarice Thomas leaves to cherish her memories her children, grandchildren, brothers, nieces, nephews, aunts, uncles, and a host of relatives and friends.

Psalm 55:22 “Cast your burden on the lord and he will sustain you; he will never permit the righteous to be moved.”
Read Less

To send flowers to the family or plant a tree in memory of Clarice Thomas, please visit our Heartfelt Sympathies Store.

Receive notifications about information and event scheduling for Clarice

We encourage you to share your most beloved memories of Clarice here, so that the family and other loved ones can always see it. You can upload cherished photographs, or share your favorite stories, and can even comment on those shared by others. 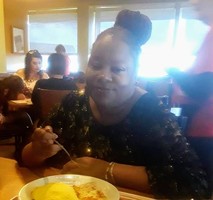