To share your memory on the wall of Jamaine Golding, sign in using one of the following options:

Jamaine was born on Sunday, July 17, 1977 in Bronx, NY to Desmond and Monica Golding. Jamaine attended elementary school at PS111, junior high at MS180, and high school at Harry S. Truman in New York. In high school, he played football and aspired to work in the music industry mixing beats. He took classes at Monroe College and obtained his GED in 1996.

In 1998, he moved to Texas, where his life led him into woodworking, which became his passion for many years. In November of 1999, he met his soon to be wife, Victoria Ballard (Tori). Jamaine and Tori had two children, Jaylen and Tavian Golding. They got married in March of 2003. Jamaine carried on woodworking for a while, but mostly worked in the warehouse industry to provide for his family. He was a wonderful, devoted, and awesome husband and father. He was truly loved by all, and he touched many lives throughout his journey on this earth. He will be missed by so many.

To send flowers to the family or plant a tree in memory of Jamaine Vincent Golding, please visit our Heartfelt Sympathies Store.

Receive notifications about information and event scheduling for Jamaine

There are no events scheduled. You can still show your support by sending flowers directly to the family, or planting a memorial tree in memory of Jamaine Vincent Golding.
Visit the Heartfelt Sympathies Store

We encourage you to share your most beloved memories of Jamaine here, so that the family and other loved ones can always see it. You can upload cherished photographs, or share your favorite stories, and can even comment on those shared by others. 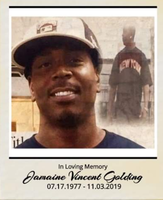