To share your memory on the wall of Nat Fralia, sign in using one of the following options:

To send flowers to the family or plant a tree in memory of Nat Fralia, please visit our Heartfelt Sympathies Store.

Receive notifications about information and event scheduling for Nat

There are no events scheduled. You can still show your support by sending flowers directly to the family, or planting a memorial tree in memory of Nat Fralia.
Visit the Heartfelt Sympathies Store

We encourage you to share your most beloved memories of Nat here, so that the family and other loved ones can always see it. You can upload cherished photographs, or share your favorite stories, and can even comment on those shared by others.

Douglas Fulfer and Edward and Denise Katsnelson sent flowers to the family of Nat Fralia.
Show you care by sending flowers

Posted Jun 28, 2020 at 10:57am
Our sincere condolences on the loss of your father. You are in our thoughts during this difficult time. The Lombardi family

3 trees were planted in the memory of Nat Fralia

Posted Jun 28, 2020 at 02:46pm
I would like to say that what I love most about Mr. Fralia is he had the courage to do the right thing when it was very unpopular. He was sent to Taiwan to replace an ineffective Special forces team. He was given the option to pick his own team members. He chose my Dad, Ronald Bredell. He received considerable push-back from the Commander of Forces in Okinawa and Japan, but he stuck to his guns. He was a principled man. I am not saying he was perfect, but when it came down to doing the "right thing," Nat did just that. We are talking in the early 70s. No doubt this hampered promotions and awards. There is an old say, "In all of the world of give and take, there is not enough people willing to give what it takes. Thanks Mr. Fralia for doing the right thing!!

Posted Jun 28, 2020 at 01:56pm
With love and admiration from Andre and Ronald Bredell. You will be greatly missed!

Flowers were purchased and a memorial tree planted for the family of Nat Fralia. Send Flowers

Posted Jun 24, 2020 at 12:39pm
I have so many great memories of my Uncle Nat I'm sure there's not enough space here to tell them. Always enjoyed sitting with him and my Dad during their visits to California and listening to their stories about the 11th Airborne! Also loved his stories about his time in Vietnam, especially when our Sons Steven and Danny were sitting with us listening with their eyes as big as saucers! Was SO glad Aunt Martha and Joanne were able to bring him out here to Phoenix last year for such a wonderful visit. Uncle Nat, I'll always miss watching you remove your index finger and put it back on right in front of my eyes!!

Aunt Martha, Joanne, Caroline, Nat Jr., Rusty, Ethan and the whole family; I realize it's a difficult time right now, but I know when the pain subsides a bit you'll be able to enjoy all your memories of him and will be able to chuckle once again as I have. We all love you very much...
Comment Share
Share via:
JF 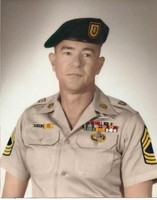