To share your memory on the wall of Rachel Salinas, sign in using one of the following options:

To send flowers to the family or plant a tree in memory of Rachel Salinas, please visit our Heartfelt Sympathies Store.

Receive notifications about information and event scheduling for Rachel

There are no events scheduled. You can still show your support by sending flowers directly to the family, or planting a memorial tree in memory of Rachel Salinas.
Visit the Heartfelt Sympathies Store

We encourage you to share your most beloved memories of Rachel here, so that the family and other loved ones can always see it. You can upload cherished photographs, or share your favorite stories, and can even comment on those shared by others.

Posted Mar 13, 2020 at 01:47pm
May God be with you all in this difficult days, we’ll be thinking and praying for you all, may God give you all the strength to get through these days, please take care and may the Lord be with you all. Rudy & Emma Salinas. Frankfort, Indania. 🙏🙏🙏🙏
Comment Share
Share via:
HS

The FTD Living Spirit Dishgarden was purchased for the family of Rachel Salinas. Send Flowers

The FTD Deepest Sympathy Arrangement was purchased and planted a memorial tree for the family of Rachel Salinas. Send Flowers

Posted Mar 10, 2020 at 07:18pm
Our deepest sympathy and condolences to our Family on the lost of your wife , mother ,Grandmother and great Grandmother, a very special person, May she R . I . P . We ask God to give you all strength in this difficult time, we’ll pray that God will help you all to be strong in this difficult days to come. We love you all, please take care and may God Bless you all . Rudy and Emma Salinas Frankfort,Indania 🙏🙏🙏🙏🙏🙏🙏🙏
Comment Share
Share via: 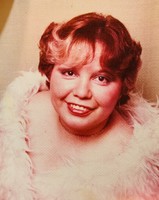