To share your memory on the wall of Reverend Phillip Reed, sign in using one of the following options:

Print
Phillip Douglas Reed passed into the eternal care of his Heavenly Father through Jesus Christ on Saturday, January 4, 2020, in Burleson, TX.

Phil was born at Millington NAS, TN, on April 11, 1949, to Howard Philip and Bobbie Jean Hollebeke Reed.
After attending schools in four states and in Germany, he graduated from Gulfport East High School in Gulfport, MS. He later graduated from Angelo State University in San Angelo, TX, and from the Concordia Theological Seminary in Fort Wayne, IN.

He served in the US Army from 1970-1977. He served as a minister for the Lutheran Church Missouri Synod in Panama City, Panama; Ennis, TX; Marysville, WA; Wautaga, TX; and Burleson, TX.

Phillip was preceded in death by his father, Howard Reed, in 1998; and by his first wife, Beverly Buddin Reed, in 2012.

In lieu of flowers memorials may be made to Redeemer Lutheran Church, 4513 Williams Road, Fort Worth, TX.
Read Less

To send flowers to the family or plant a tree in memory of Reverend Phillip Reed, please visit our Heartfelt Sympathies Store.

Receive notifications about information and event scheduling for Reverend Phillip

There are no events scheduled. You can still show your support by sending flowers directly to the family, or planting a memorial tree in memory of Reverend Phillip Reed.
Visit the Heartfelt Sympathies Store

We encourage you to share your most beloved memories of Reverend Phillip here, so that the family and other loved ones can always see it. You can upload cherished photographs, or share your favorite stories, and can even comment on those shared by others. 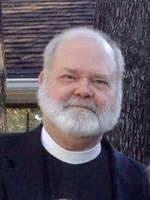